We’re all curious how approval voting stands in Fargo for the upcoming ballot measure. So over the last week, CES contracted a poll with Prime46, a local polling agency in North Dakota. Here’s what we have:. 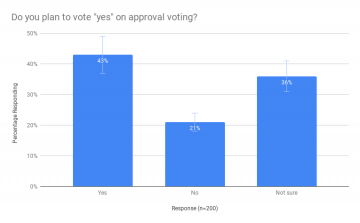 Both CES and Reform Fargo have received quite a bit in earned media, which has helped with awareness. Now CES is doing more direct messaging outreach for its educational campaign. And Reform Fargo just started its direct advocacy messaging to support the measure all the way up until election day. While we’d prefer to have a smaller confidence interval than +/- 7% in our poll, we also want to make sure that we focus our spending more on getting people comfortable with approval voting.

If you’d like to see this measure pass, you can support our education efforts as well as volunteer with Reform Fargo to directly get the message out.

Thank you for helping to make history!