Sharing the freedom of approval voting at freedomfest 2018

Surrounded by booths to disrupt the duopoly and to enact strict term limits for members of Congress, one thing was clear at FreedomFest 2018. Libertarians are tired of being overlooked and marginalized by our election system. 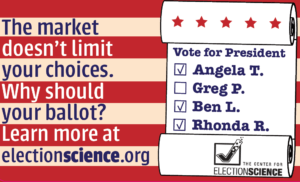 Person after person approached our booth to ask us what exactly election science was all about, and then shared with us that they felt they often couldn’t vote for the candidate they really wanted.

“I held my nose and voted for Trump,” said one woman, as she grabbed one of our CES-branded clips and pinched her nose. She preferred Gary Johnson in the 2016 presidential election, but was worried that if she voted for him, she might help elect Hillary Clinton.

It’s a common sentiment that we hear no matter where we are, and no matter the political ideology of the person we meet.

Another common theme is how few people know that we don’t have to vote this way, and how pleasantly surprised they are to learn that there is a better option: approval voting.

FreedomFest attendees were shocked to learn about our 2016 presidential polling results, where we found that Gary Johnson received seven times as much support under approval voting compared to our current method of plurality voting. That’s a huge difference, especially when many third party candidates are often fighting just to secure their spot on the ballot or the debate stage.

It was great to see how excited people were to learn about approval voting at FreedomFest this year, and we’re looking forward to working with our new freedom-minded supporters to push for a better voting method that will allow them to vote for all of their favorites in future elections. However, it also shows just how important it is for us to continue to educate people about voting methods. People can’t support a new, better way of voting if they don’t even know it’s a possibility!

How can you help more people learn about approval voting? Consider making a donation to support the education we provide at events across the country. If you make a gift of at least $10 per month, we’ll send you a free sticker (pictured above).

ABOUT THE AUTHOR
Kirsten is a professional fundraiser with experience raising money for a variety of causes including raptor conservation and childhood literacy. She holds a Master of Public Policy from the University of Utah, and bachelor’s of arts degrees in Political Science and Mass Communication from the University of Arkansas at Little Rock. When she’s not working, you’ll find Kirsten playing with her dogs, cooking inventive vegetarian dishes, or exploring her new home of Fayetteville, Arkansas with her husband.
previous POST Next POST