This was our first time at FreedomFest, a large political conference aimed at libertarians. (As a nonpartisan organization, we don’t discriminate based on ideology.)

Excitingly, we were asked to do the event’s official straw poll, much like we did with the Republican Liberty Caucus. Here’s how we did it. 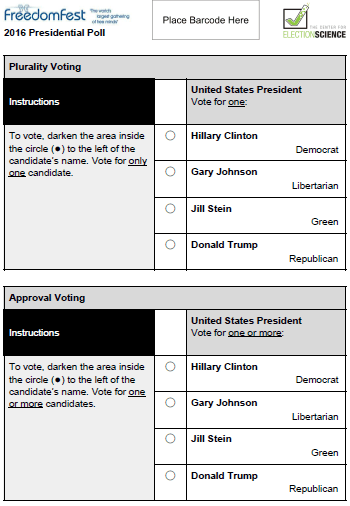 We used both plurality voting and approval voting as a way for participants to understand the difference between the voting methods. Plurality voting is our status-quo method where voters only choose one candidate. This method is notorious for vote splitting among similar candidates. It also has voters fear a wasted vote when they support third parties and independents. In contrast, approval voting lets voters choose as many candidates as they want, which addresses these major downfalls of plurality voting.

Aside from the voting method, we were methodical on the process as well. Each attendee had a badge with a barcode, which we read and recorded. You had to get your badge recorded in order to get a ballot with a separate barcode. If you tried to vote twice, your badge being read would cause a buzzing sound alerting one of us at the booth.

After a voter would receive their ballot, they’d get one bar code on their ballot, which is disconnected from their badge to preserve anonymity. Voters would get a second barcode with a number in order to identify their ballot later on. The links at the bottom of this post will let you check your ballot to be sure it was counted correctly.

Given that the conference was libertarian leaning, it wasn’t too surprising to see Gary Johnson do well. Johnson won under plurality voting, and under approval voting, Johnson did even better.

As voters were voting how they would in November under plurality voting, a number of voters withheld their vote for Johnson, though he still had enough support to win. But it was a different story under approval voting, where voters didn’t need to fear a spoiler effect.

Approval voting also tends to give support for candidates who would otherwise do poorly under plurality. The exception is when that electorate doesn’t see merit in a candidate, which appeared to be the case with Clinton. Stein, a third-party candidate for the Green Party, did similarly (though still better) than Clinton under plurality voting.

Under approval voting, however, voters overwhelmingly preferred Stein over Clinton. This is interesting considering that Stein is much more liberal than Clinton, and this was at a libertarian conference. Some of the considerations here may be Stein’s policies on individual rights such as drug policy as well as her perceived character compared to Clinton.

Overall, it’s clear the real contenders in this straw poll were Johnson and Trump. And there, Johnson won handily. Approval voting let us know just by how much.