Peter Singer is an Australian professor in bioethics at Princeton University and one of the effective altruism movement founders. To encourage giving, his nonprofit, The Life You Can Save (TLYCS), developed what they call giving games[1]. This is when a bunch of people get together—typically at a business event or university—and decide to give collectively.

Singer’s nonprofit isn’t the only one out there that raises money for other charities. This is pretty common. One group, Games Done Quick, gives collectively through a fundraiser where video game players beat games as quickly as possible (in some cases blindfolded).

So here’s the question: How do you collectively decide where to distribute all the raised funds?

You vote on it.

This article will look only at winner-takes-all and tiered solutions. Proportional solutions won’t be covered. If the idea is to maximize the amount going to the best charities, then using a proportional approach may undermine that goal as well as distribute less than useful amounts. Proportional approaches in this context also create added complexity, which isn’t necessary here. To drive this point home, one highly proportional approach would be to simply have people donate on their own to the charity of their choosing, but that would defeat the purpose of a giving game or fundraiser. 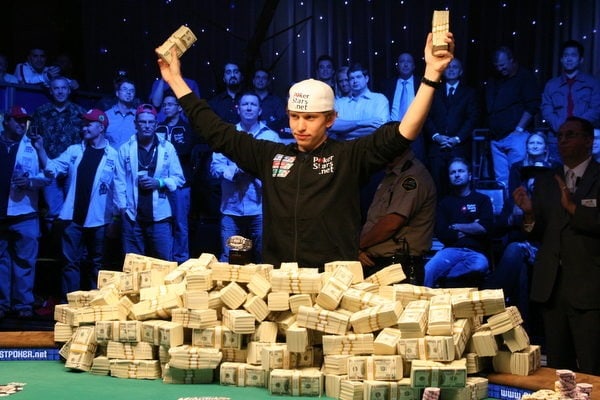 Winner-takes-all means that one charity gets all the money. This is a particularly good option if you’re distributing a limited amount of funds and you want to make sure the winner gets a sizable donation. You also want to make sure you maximize the amount going to effective charities.

Here, it’s hard to match the simplicity of approval voting. With approval voting, each voter would choose as many charities as they want. The charity picked the most would win. Approval ballots work wonderfully when you have many options or you want calculation to be really quick. This method does have a nontrivial risk of ties when there are few voters, but this is easily addressed (discussed shortly).

Another option is score voting. Score voting has voters score each charity on a scale, say 0-5. The charity with the highest average score would win. For simplicity, a voter not rating a charity would have their ballot count as scoring that charity a zero.

Score voting requires a little more mental effort and time to hand count. But it also accomplishes one of the goals in these games. It causes voters to think more about how they give and get into the nuances of each charity’s merit. Because of this added effort, however, score voting is generally best when there are fewer than ten options.

And if there’s a tie? No big deal—just split the payout[2]. Or, if you really want to choose one charity, then do a runoff[3] with the tied options.

Ranked methods are not advised here. Approval and score voting should get the job done just fine and without the added complexity and calculation time inherent in ranked methods. The results from approval and score are also easy to read and resist vote splitting, unlike many ranked (a.k.a. ordinal) methods.

Plurality voting (choosing one, most votes wins) is a terrible voting method and should never be used unless there are only two candidates. And with so many charities, having only two candidates would be boring anyway (with the exception of speed giving[4]). 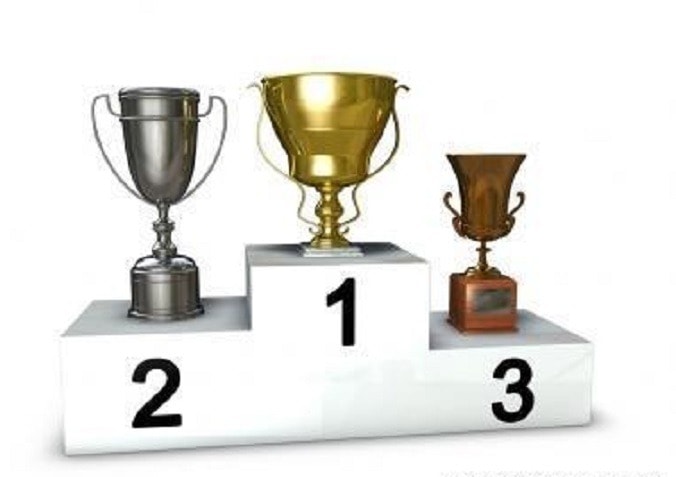 Tiered distribution is another approach when you want to give money to multiple charities. The tiered breakdown TLYCS gives is pretty reasonable: 70% for 1st, 20% for 2nd, and 10% for 3rd. A tiered approach can work when you have over $10,000 to give as a group. Even so, using a winner-take-all approach will probably be fine with a larger payout.

So how do you decide who’s first, second, or third? You do the same calculation for approval and score voting as you did with winner-takes-all. Just take the the top three from approval voting or score voting, whichever your group prefers. (This is called a bloc method approach.) If there’s a tie, again, just split the distribution. 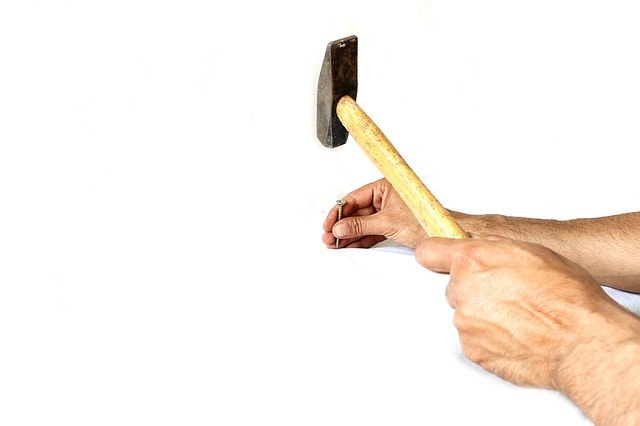 TLYCS tends to produce its own nominees, but gathering nominees is totally reasonable. You can do this informally as a group or online using Google Forms. Note that you’ll probably have lots of candidates if you gather nominees, which may call for approval voting to simplify your ballot. Approval voting is an excellent choice when you have many candidates. 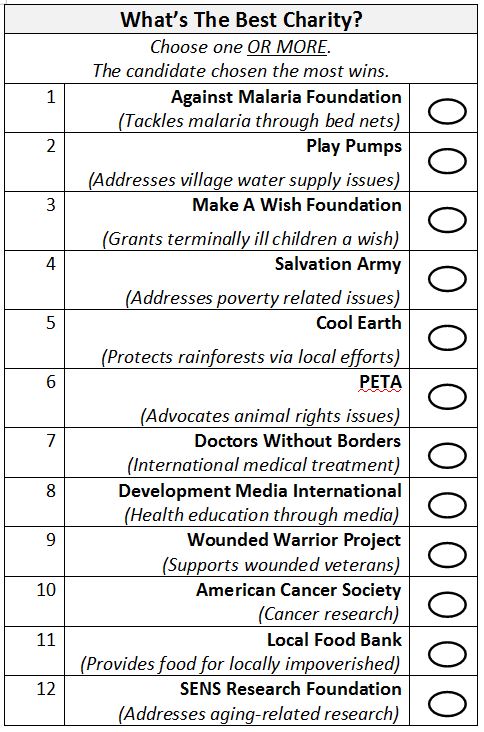 An approval voting ballot is simple. Feel free to download a template from CES if you want to make sure you get things right. If you’re using Google Forms (which unfortunately doesn’t allow us to create read-only templates), this simply means using checkboxes and allowing users to pick as many options as they want. Most votes wins. If you’re voting in person and don’t care so much about anonymity, then you can call out each candidate and ask for a show of hands. Just let participants raise their hand for more than one candidate if they like.

Tip: If you’re using Google Forms, you can create links with the options so that voters can get more information. Or, you can include information within the ballot itself. You can also do this with CES’ approval voting app!

Calculating results is easy with approval voting. For each candidate, their approval percentage is their number of votes over the total number of ballots. Or, you can simply count up the votes and leave it at that. 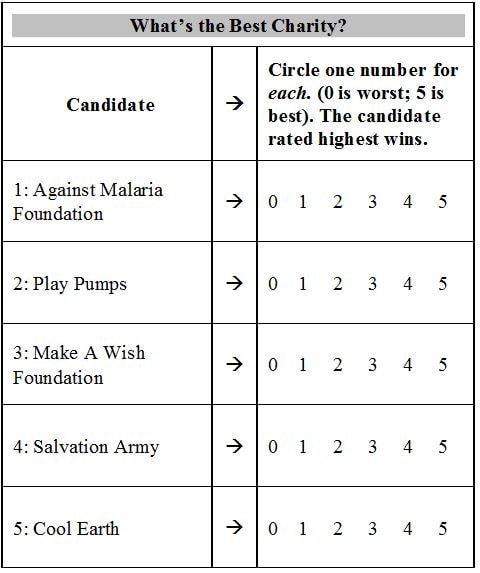 Score voting has participants score each candidate on a scale. A 0-5 scale is simple and has some nice properties. We have templates for this on the CES site. You can do this with Google Forms too by treating each candidate as its own question and using a scaled response. For simplicity, candidates that aren’t scored on a ballot are counted as a zero. If you’re using Google Forms, then you can also require voters to score each option. If you’re voting in person and don’t care about anonymity, then you can also use a hand-raising route. For each candidate individually called, have voters raise up to five fingers. If they’re voting a zero, then they can either leave their hand down and get counted as a zero or hold up their hand as a closed fist.

To calculate results as a percentage for each candidate you can tally up their total score and divide that by the total number of ballots multiplied by five (the max score). You could also take the average score. Or, like approval voting, you can just count up all the scores. Highest score wins. All of these options provide the same winning order.

Using the right voting method is key to make sure that your event runs smoothly and meets its objectives. Plus, using smarter voting methods makes sure that money goes towards the right charity. Good luck!

[1] Giving Games are a charitable giving activity set up by TLYCS (see their manual).

[2] For ties within a tiered distribution, be sure to include the next prize down. For instance, a two-way tie for first would add the first and second prizes together and divide them between the two tied winners.

[3] An additional option if you’re using score voting is to use the scores to simulate pairwise comparisons between the tied charities. (For example, a ballot scores tied charities A a 4 and B a 3. The pairwise comparison would give charity A one vote and charity B zero votes for that ballot. Repeat with all ballots.) Any agreed-upon tiebreaker should be stated before the vote is done. For clarity, you don’t need a runoff with these methods unless there is a tie. If you’re hung up about majorities, then you should read our article on that topic.

[4] Speed Giving games are common at tabling booths. The person at the booth offers you a dollar to place in a choice of charity jars. With Speed Giving, there can be anomalies when you have one dollar and more than two candidates. And strange strategy issues arise when you have multiple dollars but can assign no more than one dollar to a candidate (for instance, assigning a dollar to all the charities without much thinking). Easiest is to just give each participant a dollar and have them choose to donate it to one of two charities.